In this FFmpeg tutorial, we learn to change the resolution of a video (or resize/scale a video) using FFmpeg’s commandline tool.

Changing a video’s resolution (also known as resizing or scaling) is a very common operation in video editing, processing, and compression. This is particularly true for ABR video streaming where a single video is taken as the source and compressed to several different bitrate-resolution combinations. For example, the input video’s resolution could be 1920x1080 and ABR bitstreams could be 1280x720, 640x480, etc.

So, as the very first step, let’s find out what the input video’s resolution is. Using the ffprobe tool that’s shipped with the FFmpeg builds, let’s determine the resolution of an input video. Here’s the command line using ffprobe. If you don’t have access to ffprobe, you can download it from OTTVerse’s FFmpeg build page.

The output of this command should be something like this 1920x1080 displayed on your console. That’s great – you now know the video’s resolution and can scale or change the resolution now.

Note: You must note that the act of up/down scaling is a lossy process and will result in some loss of video quality.

How do you Resize/Scale/Change the Resolution of a Video using FFmpeg?

where, $w and $h denote the required width and height of the destination video. For example, you could use -vf scale=640:480 to resize your video to 480p.

That’s it! With this simple command, you can change the video’s resolution with FFmpeg.

And, after FFmpeg changes the resolution of the video, it will re-encode it at that resolution. In the command line above, you can supply encoding parameters to FFmpeg and encode the scaled video using those parameters. For example, you could tell FFmpeg to encode it using crf=18 for pretty high-quality H.264/AVC encoding, or choose something else!

All good? Okay, let’s tackle the next subject which is changing a video’s resolution but retaining/keepings it’s aspect ratio.

How to Resize Video While Keeping the Quality High with FFmpeg

After resizing, you might notice that the quality of the output video is pretty bad or not what you expected. This can be easily fixed by telling FFmpeg the video encoding parameters that you would like to use after the resizing process.

Here is an example –

Here, you are telling FFmpeg to scale the video to 720p and then encode it using crf=18 with libx264‘s slow preset that usually provides very good quality due to the number of coding tools that it turns on.

How to Change the Video’s Resolution but Keep the Aspect Ratio?

Related:  How to Crop a Video with FFmpeg's crop filter

It is very common to run into this problem while working with videos: How do I change a video’s resolution (or scaling a video) but keeping or retaining the video’s original aspect ratio.

In FFmpeg, if you want to scale a video while retaining its aspect ratio, you need to set either one of the height or width parameter and set the other parameter to -1. That is if you set the height, then set the width to -1 and vice-versa.

To demonstrate, assume the following commands take a HD video (1920x1080) as its input. And, let’s assume that we want to change its resolution. This can be done in two ways as discussed above, so let’s try both ways.

1. Specify the Width To Retain the Aspect Ratio

2. Specify the Height To Retain the Aspect Ratio

Use Variables to Scale/Change Resolution of a Video in FFmpeg

We can implement the same scaling commands using variables that denote the video parameters. The input video’s width and height are denoted by iw and ih respectively.

Let’s see what a command to scale the video’s width two times (2x) looks like.

If you want to divide either the height or width by a number, the syntax changes a little as the scale=iw/2:ih/2 argument need to be enclosed within double quotes.

Avoid Upscaling a Video based on the Input Video’s Dimensions

As we mentioned right at the start of the article, every up/down scaling action will usually not produce the same level of video quality as the input video. There is bound to be a few compression losses during the scaling process. If the input resolution is too low, FFmpeg offers a neat trick to prevent upscaling.

In the command line above, the minimum width/height to perform scaling is set to 320 and 240 pixels respectively. This is a very simple way to guard against poor quality scaling.

If you enjoyed this post, do check out the rest of OTTVerse’s FFmpeg tutorials to learn more about how to use FFmpeg to improve your video editing, compression, and processing skills! 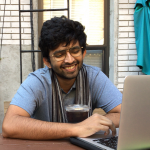